By Ashley Depew and Elliott McVeigh

In a century-old duplex, Lenora Brown’s history hangs on the walls, shown in family portraits and celebrations of Black activists. Brown wakes up at 4 a.m., sips coffee and watches the news and The Golden Girls for a few hours.

By 9 a.m., her grandson Breyon, 14, is sitting at the dining room table, tapping on his laptop for his summer college courses. A rising sophomore, he attends North Division High School, just one mile away.

North Division, like other public schools across the U.S., struggles to secure funding to meet the needs of its staff and students. The federal government has issued three rounds of COVID-19 relief funding for schools to address inequities magnified by the pandemic and preexisting ones that haven’t allowed all children in the country access to a quality K-12 education.

Wisconsin parents and advocates, like Jenni Hofschulte with Parents for Public Schools, are fighting for budgetary support from the state. 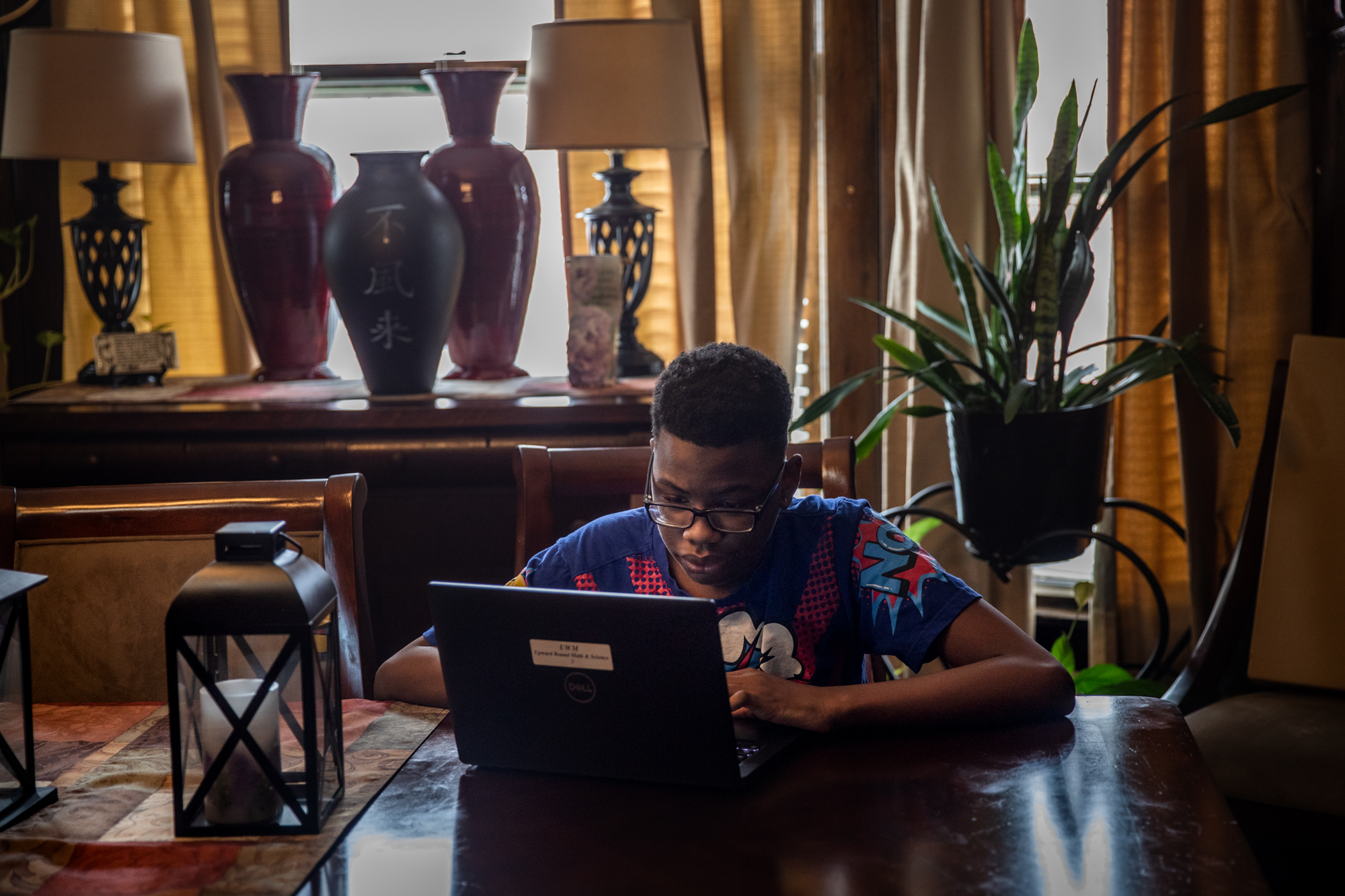 Breyon Brown sits at his grandmother’s dining room table to do work for the college courses he takes through the Upward Bound program with the University of Wisconsin-Milwaukee. (Ashley Depew/News21)

As tough as the pandemic was for education, she said, it also offered a chance to fix the school system’s problems. “We have an opportunity here to invest in more teachers, to reduce class sizes, to make necessary and long-overdue building improvements to our schools.”

When the most recent of three congressional bills was enacted in March 2021, the total relief funding for K-12 education amounted to $190.5 billion. In a normal year, federal funding makes up less than 10% of K-12 budgets, with state money and district revenue filling in the rest.

Each state is required to submit a plan for how relief funds will be spent in order to receive the full amount. The federal government published requirements to make sure funds are supplementary, not a substitute.

Wisconsin lawmakers attempted to do just that — the Legislature cut education funding in a draft of the most recent budget. But the U.S. Department of Education sent a letter in May warning they wouldn’t receive the rest of their relief funding. In response, Wisconsin allotted more state funding to education but kept spending limits the same as in the previous budget.

“They’re really using the schools as a conduit to send money back to taxpayers,” said Wisconsin Sen. Jeff Smith, a Democrat. “It is also not a progressive tax cut, because, of course, those with higher property values are going to get the biggest cut.”

When the U.S. Department of Education was asked how they would respond to a state not using the federal COVID-19 relief funding as intended, a spokesperson for the department replied via email:

“The purpose of the American Rescue Plan and other federal pandemic relief funds is to provide additional resources to states so schools can better respond to the tremendous impact the pandemic has had on students. These resources do not take the place of state funds.”

North Division High School in Milwaukee, Wisconsin, is located in one of the area’s most impoverished neighborhoods and is at risk of being closed down. (Ashley Depew/News21)

The COVID-19 relief funding targets kids from underserved communities and aims to close the opportunity gap between wealthy and less wealthy children — the percentage of poverty in Milwaukee is 25%. That gap has been exacerbated in Milwaukee since inner-city public schools started closing down due to shortages in enrollment and funding.

North Division is among the nation’s schools that have dropping enrollment and could close down; the school’s low test scores, graduation rates and downtown location deter parents from enrolling their kids there. The school has capacity for 2,000 students and a current enrollment of about 500.

“That will be really depressing if that closes down,” Breyon Brown said. “That school is just so motivating and so nice to me — all the teachers.”

He was failing his middle school classes and moving from couch to couch with his mom, so he came to live with his grandmother. She noticed he was pulling his hair out from stress and couldn’t grasp virtual class content when the pandemic started at the end of his eighth grade year. 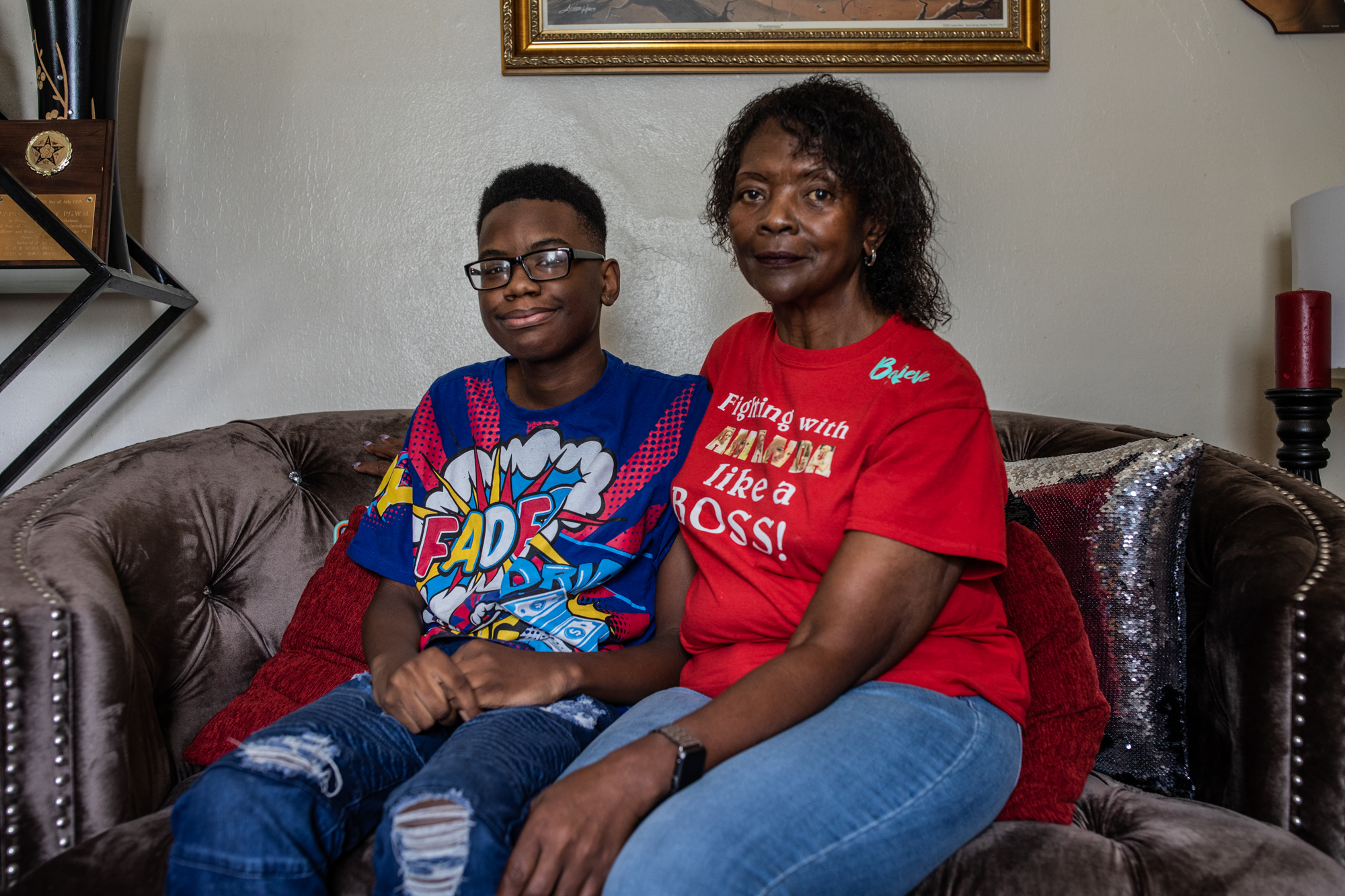 Breyon Brown with his grandmother Lenora Brown in their home in Milwaukee, Wisconsin. (Ashley Depew/News21)

The middle school was private, and his teacher recommended that he enroll in a public high school with more resources. His grandmother transferred him to North Division, “where he is now at the top of his class,” she said.

“I just hope I live to see him become an adult. God doesn’t say when we gonna go, but my days are numbered,” Brown said. “I just want what’s best for BJ.”

Breyon pledges to make his grandmother proud. If he’s successful, he will have to overcome a discriminatory system where people of color live in some of the city’s poorest neighborhoods.

In Milwaukee, as in other major cities in America, people have been moving to the outlying suburban districts in recent decades, leaving abandoned buildings behind and causing property values to drop. Decreased school enrollment in the city and dwindling taxable revenue are negative side effects of the population shift for public schools.

“What has happened in a place like Milwaukee? Well, white flight is taking place. There’s no jobs,” said Wendell Willis, director of the Milwaukee Public School Foundation, which offers scholarships to students with little opportunity. “So now you’re under-resourced because there’s no one to really tax and no one really cares because why? It’s students that look like me.”

Referendums allow citizens in districts to vote to raise tax revenue for their schools above what the state has allowed. They’ve been increasingly common since Wisconsin capped school revenue. In areas with higher property values, a percentage tax increase will raise more money than the same tax increase in a less wealthy area. 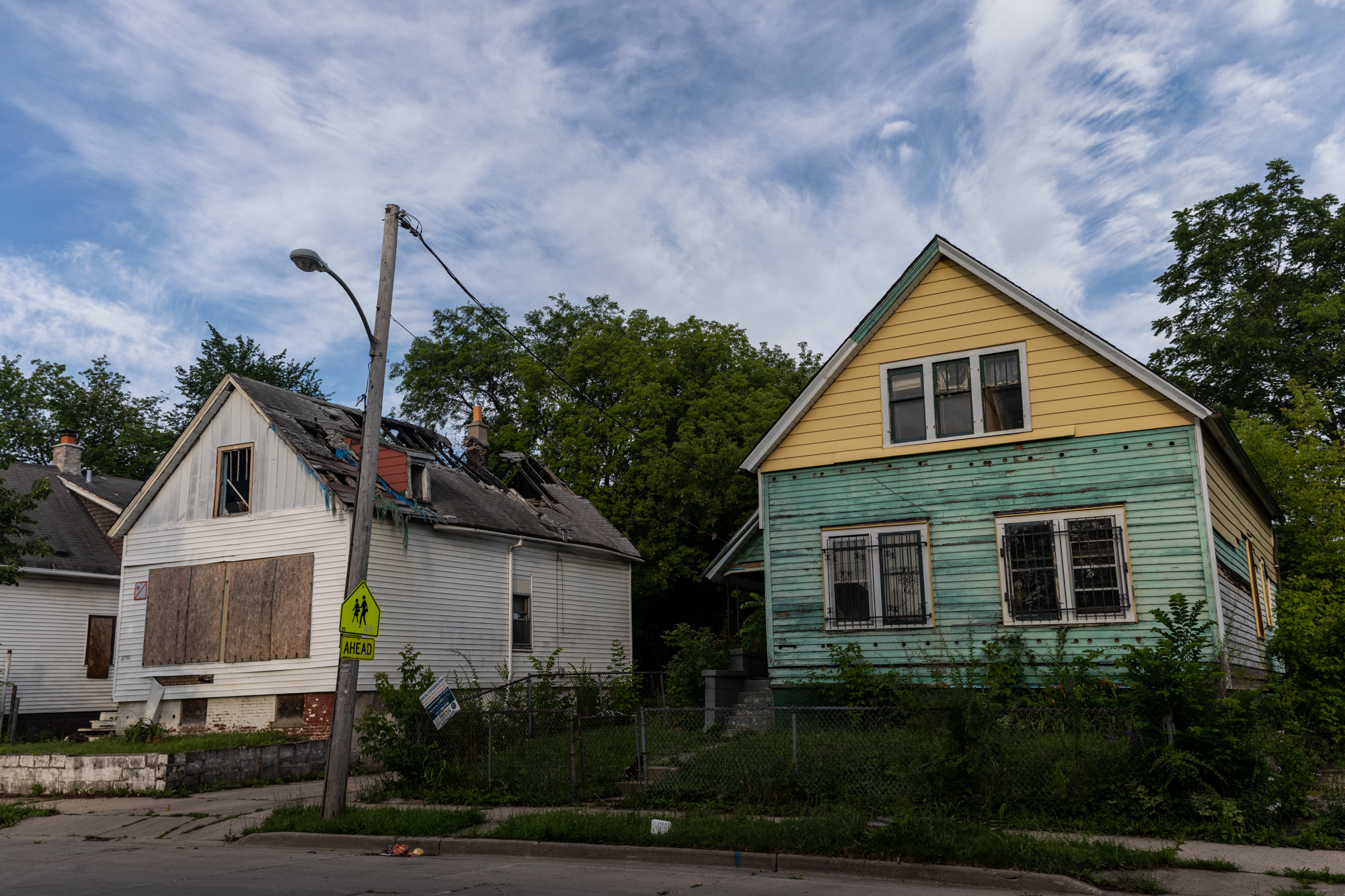 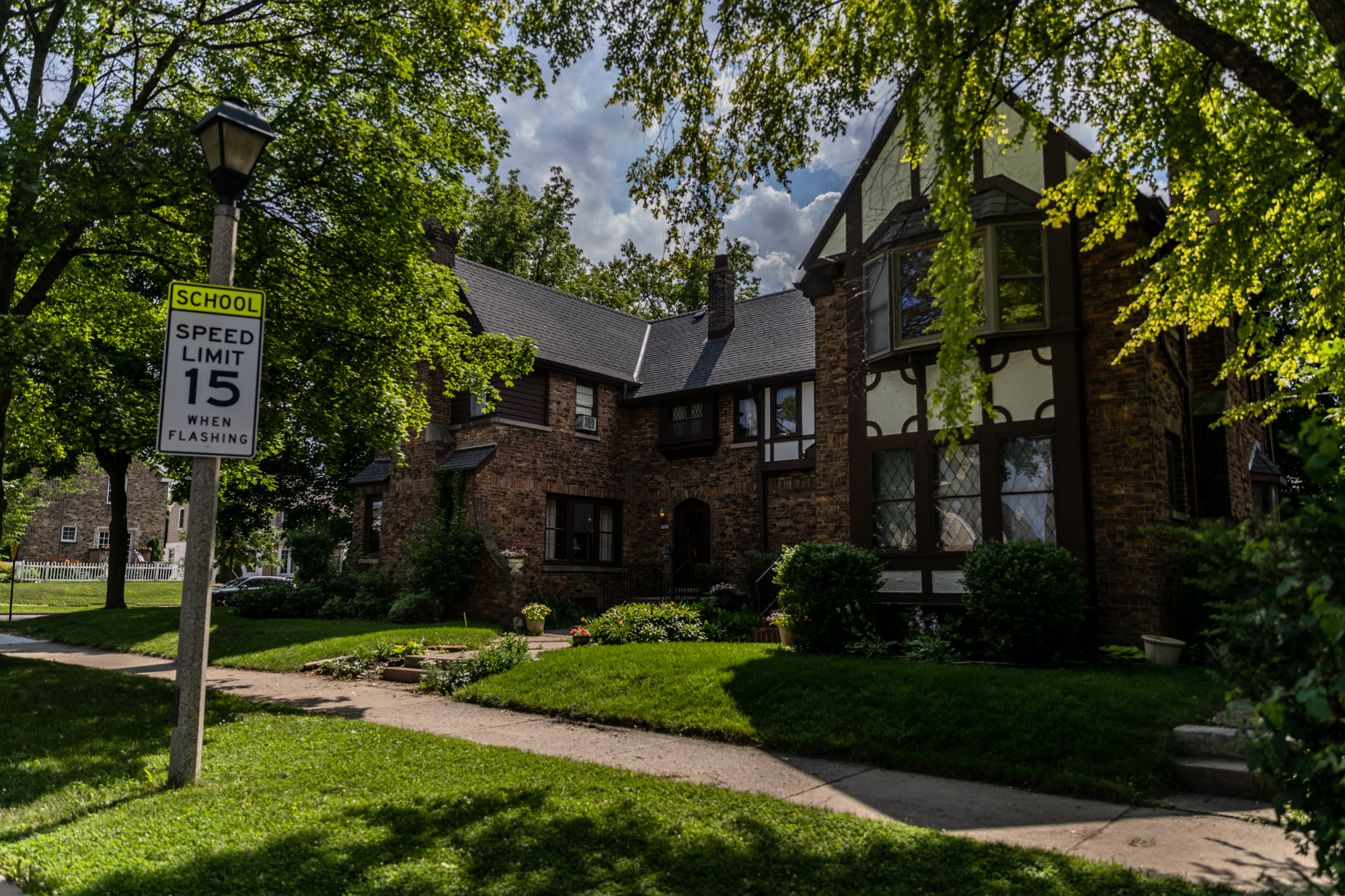 Many houses around North Division High School have been abandoned and are falling apart. Families often move from Milwaukee, Wisconsin, to the suburbs for better public schools and safer neighborhoods, if they can afford it. (Ashley Depew/News21)

Pandemic relief funds were supposed to relieve some of the recurring inequities in public education.

COVID-19 relief funding was allocated to states based on the proportion of aid they receive from the federal government in a normal year for children from low-income families. States with a more impoverished student base received the largest amount of aid, because those children faced more challenges during the pandemic.

State Rep. Jeremy Thiesfeldt, a Republican, said the COVID-19 federal relief money in Wisconsin was so plentiful, it gave the state the ability to cut taxes.

“In good conscience, an elected legislator cannot ignore the amount of money that is coming from the federal government that is available to these schools to fund their operations,” Thiesfeldt said.

Some disagreed with the move.

“It is cruel,” said State Sen. Smith, a Democrat. “It’s dangling it in front of them … and saying, ‘But you’re going to have to cut the property taxes that you’re getting’ … then the Legislature is going to take the credit for cutting taxes.”

Breyon Brown operates a small robot for the college robotics course he takes through the Upward Bound program with the University of Wisconsin – Milwaukee. (Ashley Depew/News21)

Breyon Brown has named his robot “B-Mo.” He can control it with an app on his phone. (Ashley Depew/News21)

The pandemic revealed other inequities, like safety in neighborhoods and the advantages of in-person schooling.

“I think personal issues were the biggest concern,” said Duanna Barnes, North Division’s family engagement coordinator. “Technology was small compared to what’s going on at home, because, you know, if your home isn’t right, you don’t give a darn about a computer.”

Robin Bradford, the school support teacher at North Division, said shutting down the school during the pandemic meant that some students who were previously exposed to trauma couldn’t come to school to feel safe.

She added that in the past three years, violence led to the deaths of about 12 family members of staff at the school. Some of the staff at North Division recalled three student deaths during the 2020-21 school year.

“The kids that walk through these doors come with a story,” Bradford said. “And if you can’t be compassionate to it, then it’s kind of like you’re going to hit a brick wall, and the kids are going to know, and they’re going to be like, ‘You don’t care about my situation.’”

Breyon’s grandmother, Brown, said he is concerned about violence in the neighborhood.
“So many youth have been killed or tragedy happens all the time, and then he sees this GoFundMe and he goes, ‘Oh, I hope that never happens to me,’” Brown said.

He is nervous and excited to attend North Division in person for the first time in the fall. Last school year, as at thousands of schools across the country, public school students in Milwaukee, Wisconsin, were taught remotely until April.

This summer, Breyon took courses at the University of Wisconsin-Milwaukee, that ranged from biology to yoga to robotics. The robotics course came with a small, colorful sphere that Breyon named B-Mo, which he can control with an app on his phone.

“I’m at this new school. I’m changing. I’m just trying to get somewhere in life when I grow up,” Breyon said, adding, “The universe has a plan for me, though.” 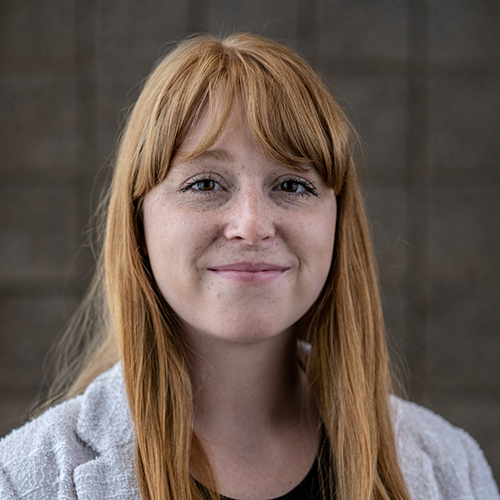 Ashley Depew is a 2021 graduate of the University of Tennessee in Knoxville, majoring in journalism and electronic media. She has focused on narrative and feature writing, design, illustration and photography and has worked with the Maryville Daily Times, the Tennessee Journalist and the university’s magazine.View her work here. 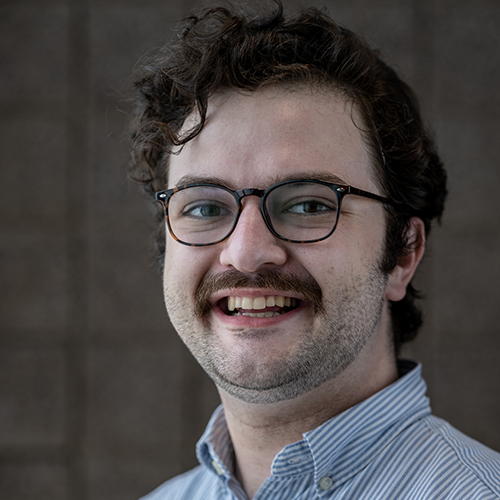 Elliott McVeigh is a journalism master’s student at Arizona State University with an undergraduate degree in theater. He has written and directed a play and worked for Cronkite News at Arizona PBS, Arizona Jewish News and Arizona Jewish Life. View his work here.