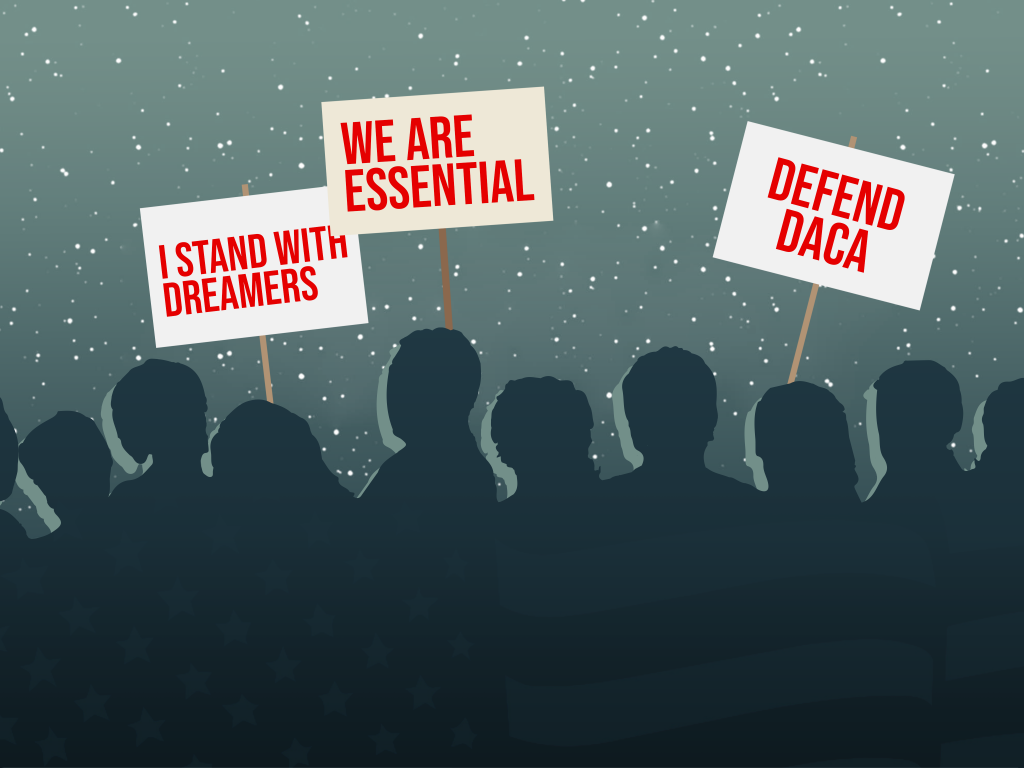 When Esmeralda Tovar-Mora, a 24-year-old in Kansas, realized that she would not get her work permit in time, she prepared her husband and 5-year-old daughter for the worst — deportation.

Tovar-Mora is one of 700,000 people in the U.S. who have temporary legal status through Deferred Action for Childhood Arrivals, also known as DACA. Originally from Mexico City, she has worked for a mental health center in Hutchinson, Kansas throughout the pandemic.

DACA recipients can renew their permits every two years but their status is not guaranteed.

Tovar-Mora received her work permit before immigration services had to get involved. But losing DACA status has become a big concern for those working jobs on the front line, from doctors to maintenance workers, during the pandemic. About 1 million DACA recipients are considered essential workers, according to FWD.us.

Tovar-Mora has managed to renew her DACA permit every two years but there have been moments where she wasn’t sure she would make it home to her husband and daughter. After the administration issued a memorandum revoking the expansion of DACA in 2017, Tovar-Mora prepared a “deportation plan.”

“I felt like the identity that DACA gave me, I lost in those few weeks. I didn’t know what to do. I didn’t know how people ever made it,” Tovar-Mora said.

Tovar-Mora immigrated to the U.S. with her family when she was 2 years old. She said she found out she was undocumented when her friends were getting their driving licenses and she couldn’t.

“I came home and I was talking to my parents about it. And that’s when they told me that I wasn’t documented,” Tovar-Mora said.

She decided to apply for a DACA permit. She’s had the documentation for about eight years.

In 2012, the Obama administration created DACA as a way to give young undocumented individuals who immigrated with their parents to the U.S. temporary permission to remain in the country legally.

Tovar-Mora said her friends realized the likelihood of DACA ending under the new administration, so they helped her create a plan on who she could leave her daughter- a U.S. citizen- with in case Tovar-Mora was deported unexpectedly.

But after 2017, the attempts to dismantle DACA did not end. On July 16, 2021, U.S. District Court  Judge Andrew Hanen, of Texas, issued a decision that DACA was unlawful and that new DACA applications would not be accepted. Current DACA recipients are temporarily allowed to maintain their status.

Peter Boogaard, a spokesperson for FWD.us, said the recent decision is not only blocking 80,000 new applicants from receiving legal protection, but it is also putting the current DACA recipients at risk.

The judge “did allow for existing dreamers to continue to renew, like he said ‘for now,’ which is obviously a pretty concerning statement,” Boogaard said.

Boogaard said this decision does not reassure DACA recipients that they’re safe from deportation during a pandemic.

“The threat of being taken out of the workforce, losing your ability to work is hugely consequential, particularly when you’re in the middle of a pandemic,” Boogaard said.

That’s  a huge worry for Edison Suasnavas, a 35-year-old DACA recipient from Ecuador, who works as a medical technologist in Utah. He has been on the frontlines of the COVID-19 virus by providing early diagnosis for cancer patients — a job that has been in high demand since the global pandemic hit the U.S.

“It was really chaotic. Everyone was taking lab technologies to the COVID-19 lab because they needed so much help,” Suasnavas said.

Suasnavas said he wishes people would realize the importance of his work, especially during a pandemic.

“We’re being essential. We’re still fighting shoulder to shoulder with American citizens to help this become better,” Suasnavas said. “The virus impacted all of us, not only U.S. citizens. We’re still in this country contributing.”

Although he’s happy to help the country, the uncertainty of his DACA status has affected his mental health.

“You’re still worried because you have a family, you have kids, you have a wife. You don’t want them to lack anything,” Suasnavas said.

Suasnavas, who came to the U.S. with his family at the age of 13, has a wife who’s on a student visa from Mexico and their two children who are U.S. citizens. He said he used to have nightmares about being deported and leaving his kids.

“Sometimes it was not easy to have nightmares that one day…immigration/ICE was going to show up and be like “hey we’re taking you,”” Suasnavas said of Immigration and Customs Enforcement.

Still, Suasnavas is grateful for his opportunities in the U.S.

“We don’t lose hope that they can see what we’re doing and what we’re accomplishing and that they give us the opportunity to stay with our U.S. citizen kids,” Suasnavas said.

Tovar-Mora is advocating for a pathway to citizenship, speaking to President Joe Biden in the Oval Office on May 14 along with five other DACA recipients.

“He had stories of his own and he made us feel comfortable to talk to him about those things,” Tovar-Mora said. “It’s a good reminder that the meeting wasn’t about politics. It was about people.”

“We are the doctors, the nurses, the teachers, the spouses, the mothers and fathers embedded into our communities,” Tovar-Mora said. “I think it’s enough to say that we’re not just essential during a global pandemic.”