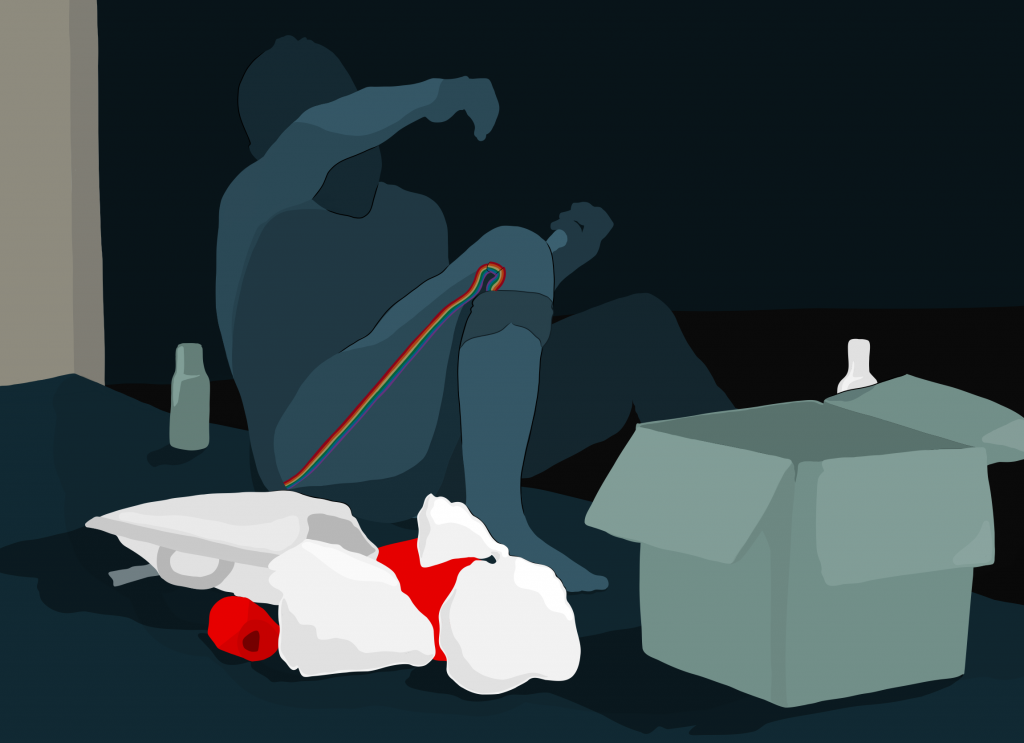 SALT LAKE CITY – A heat wave in the middle of June gave the small patch of shaded grass more appeal. Unlike the sidewalk by the Volunteers of America Homeless Youth Resource Center building, the grass is cool and soft. People sit there or on the sidewalk by the door while waiting for lunch to be served at 1 p.m.

Five to 10% of the homeless population in the nation are youths, and 20 to 40% identify as LGBTQ+. Across the country, young people leave home because their family disapproves of their identity. Places like the Utah Pride Center provide community and resources for them, but they were a challenge to access during the pandemic.

Amanda Darrow, director of youth, family and education programs at the center, said the bottom floor was designed as a safe and inclusive space. A lounge chair shaped like a red high heel, a large closet with a little bit of everything and an assortment of bright colored decorations and Pride-themed art have been untouched for over a year.

“We’re their chosen family,” Darrow said, “and you find a sense of safety, and it’s not your family you were born into, but you choose people to lift you back up out of the pain and the hardships that you went through.”

The center’s employees give out food and backpacks full of supplies to unsheltered youths and young adults, but Darrow said she hasn’t given one out since COVID-19 shut the building down. Not seeing young people was the hardest part of the pandemic for her.

According to Darrow, about 2,000 of the 5,000 homeless youths in Salt Lake City each year identify as LGBTQ+.

“We know it’s a huge problem here, because we’ve seen it for many years,” she said. “It’s been personal. That’s the thing we see the most with our kids that walk through the doors is: ‘I’ve been kicked out of my home for being LGBTQIA+, so it’s hard and it’s heavy.”

One 21-year-old LGBTQ+ youth, who is homeless, has been living in Salt Lake City for four years. The youth, who did not want to give his name, feels unsupported.

“It really sucks because we live in a community where it says:  ‘Oh, it’s OK, I don’t care.’ But then, actions speak louder than words, and there’s nothing for us to do,” he said.

But he says he has nowhere else to go. He ran away from the child welfare system in Texas at age 17 and often stays at the VOA resource center.

It was more unstable to live in during the pandemic, according to several young people.  They were unable to be in the building at certain times during the day because of new sanitation guidelines.

Sometimes, the 21-year-old is unable to stay in the resource center if it’s full or he gets into trouble. If he has enough money, he’ll rent a room at the Motel 6 downtown, where a group of adults who are homeless pitch tarps or tents on the sidewalk in front of the property.

Martinez said many haven’t been as affected by the pandemic as they could have been, because they are used to the instability of being homeless.

“There’s more… conversations, especially because of the pandemic, about homelessness within America and really recognizing that and seeing what we can do as not only as a nation, but individually, as states, counties, cities… How can we improve this?” Martinez said.