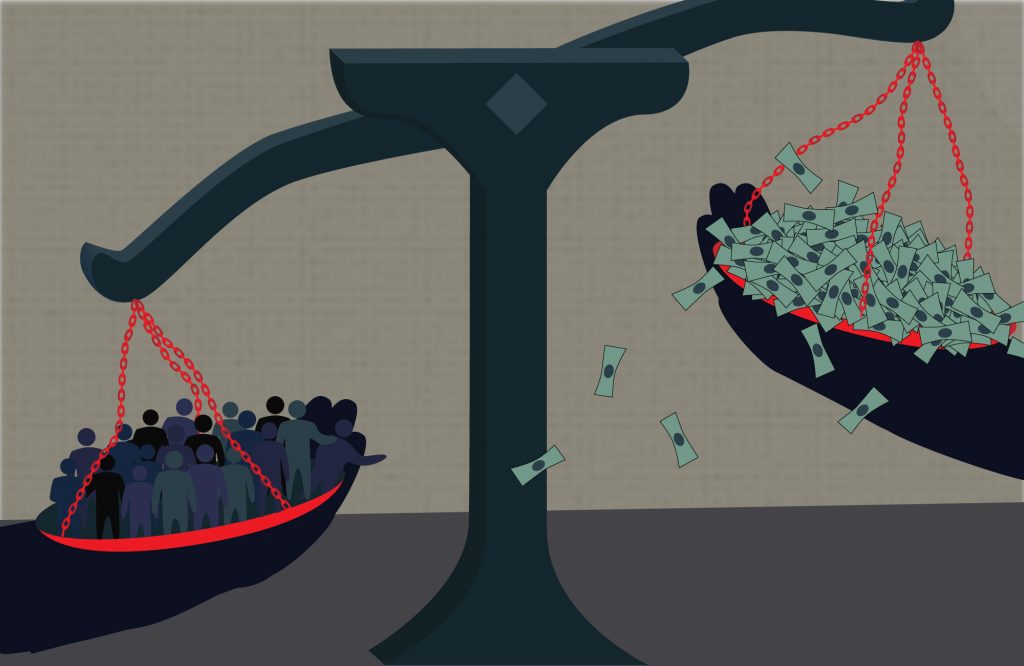 Timothy Smeeding began his research career by sitting across from the woman who created the official poverty measure of the United States — a standard he’s worked his whole career to change.

The stakes are high.

But the equation that is used for the poverty line hasn’t been updated since the 1960s. Consider 1967: the annual median income was $7,143, the median rent was under $100 per month and a gallon of gas was 31 cents and, at least at a public university in Pennsylvania, students could get a college education from the University of Pennsylvania for less than $2,000 a year.

“The official poverty measure was something that we created 70, 65 years ago, and it was appropriate for that time and period,” Smeeding said. “But it isn’t anymore.”

Most expenses, such as housing and college tuition, have skyrocketed. But the cost of food — which the poverty measure was mainly based on — has become cheaper due to better farming practices and more efficient supply chains.

Choosing measurements based on current realities

The federal government determines who is below the poverty line based on the cost of food to sustain a household, adjusted by the number of people in a family. Today, a family of four falls into poverty based on an annual household income of $26,500.

Economists who study poverty and inequality said that the measure is outdated and may be leaving behind millions of people who might be eligible for help.

“If we were going to kind of have a more realistic measure, I think it would probably show that instead of 10 percent of kids roughly being under or near the poverty line, it would be more like 20 percent,” said Shawn Fremstad, a senior fellow who studies poverty and income inequality at the Center for Economic Policy and Research.

“It was evident that of the measures that we had, the programs that were pegged to it were not sufficiently meeting the need that we saw,” said Barnes, who also works with the nonprofit Poor People’s Campaign. “It was very evident that the scale of poverty and economic insecurity was much, much greater than what has ever been accounted for.”

She said 4 out of 10 people in the U.S. “are one emergency away from economic ruin.”

But an adjustment to more accurately capture poverty in the U.S. would also balloon the costs of programs for welfare, healthcare and other government assistance programs.

The poverty-line issue is further complicated because such government assistance doesn’t consider the financial benefits already provided to the poorest families in the form of SNAP benefits and tax refunds that are not currently considered income in the United States, Smeeidng said.

“You need some measure that takes account of the programs that you’re using,” Smeeding said. He said by continuing to use an archaic poverty measure, it’s not possible to see the impact of government assistance programs like SNAP, Medicaid or welfare programs.

And the impact of the poverty-line measurement goes beyond money.

“In effect, it has a role to play in public debate and public understanding,” Fremstad said. It shapes the understanding of what poverty is and how much of it there is.

The Orshansky poverty measure isn’t the only measure that can been used for the poverty line.

He recommends that the U.S. follow the example that many European countries follow: a relative poverty measure. There, the poverty line is anywhere from 40% to 70% of the median household income.

Smeeding says the cost of living in different parts of the country should factor into any measure on poverty. What $1,000 buys in Billings, Montana does not go as far in San Francisco. A more accurate poverty measure should also factor in the cost of housing, education and child care, Smeeding said.

“Most people think that those needs should somehow change with living standards,” Smeeding said.

The poverty measures rose from the War on Poverty in the early 1960s, when the Kennedy administration decided to help families making less than $3,000 per year, Smeeding said. However, $3,000 was an arbitrary figure.

An economist on Kennedy’s Council of Economic Advisors sought to create a more systematic approach to identifying poverty.

The job to create a measurement for poverty was handed to Mollie Orshansky who worked as a social science research analyst in the Office of Research and Statistics at the Social Security Administration.

Her goal: to devise a system that would create a fair and accurate measurement of poverty in the U.S. that could be applied to a country of 180 million people.

The data available in the mid-60s to Orshansky was just a fraction of what is available today. But using data from the Department of Agriculture and studies on nutritionally-adequate diets, Orshansky developed some conclusions to calculate a poverty threshold.

Orshansky found that most families at the time spent one-third of their income on food. She used a family’s food budget to calculate the poverty threshold, giving the federal government a widely applicable and systematic approach that was adopted in 1969.

Orshansky even had the measure named after her: The Orshansky Poverty Thresholds, later documented on the Social Security Administration website and leading to her own Wikipedia page.

There were a few small voices in the 1970s, Smeeding said, who wanted to change the poverty measure to a more holistic view of a changing economy. He was one of them.

In 1972, Smeeding wrote his Ph.D. dissertation, saying there were flaws in the Orshansky Poverty Threshold while sharing the same office as Orshansky. They talked about the poverty line standard, he said. Orshansky didn’t agree with his conclusions, but always treated him courteously, he said.

“I accepted her poverty line. I just said that the income measure, the resource measure needed to be changed to reflect taxes and benefits,” Smeeding said. “I once told Congress that if Molly invented her poverty line after the Civil War, we’d be laughing at it.”

Since Orshansky’s model began guiding U.S. policy, the American economy transformed from a largely factory- and agriculture-based economy to one that is technology and information driven, Smeeding said.

That means throwing out a six-decade-old standard.

“The inability to measure poverty accurately reflects an inability of our society to address problems of need and want sufficiently,” Barnes said. “And that’s not the kind of society that any of us need.”