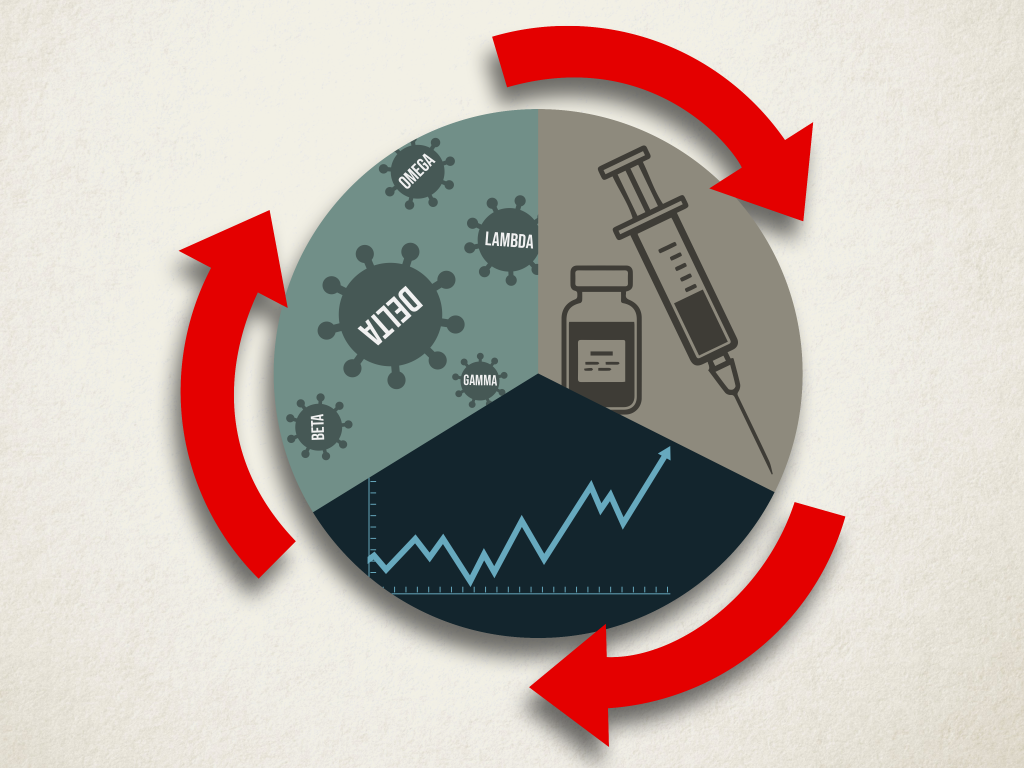 Whether the U.S. can reach herd immunity, the threshold of vaccinated people needed to stop the coronavirus’s community spread, remains an open question.

While the concept is often associated with the eradication of a disease, such as smallpox, scientists and public health experts suspect that COVID-19 will be around for a while. The reasons lie in widespread vaccine hesitancy, waning immunity, so-called breakthrough infections of already vaccinated individuals and the emergence of deadlier and more contagious variants.

In a January poll conducted by the science journal Nature, 89% of immunologists, infectious-disease researchers and virologists said they believe SARS-CoV-2, the virus that causes COVID-19, will become endemic — meaning that it will continue to circulate within pockets of the global population for the foreseeable future.

By vaccinating a large swath of the population, however, scientists and public health experts believe COVID-19 could become a manageable threat, one that resembles other endemic coronaviruses. All of them cause colds.

Mass vaccination would not only curtail transmission, but also reduce deaths from  COVID-19, preventing outbreaks like those that overwhelmed hospitals for over 1 ½ years.

“What we need to achieve is a situation where a small percent of people may wind up in the hospital,” said Arnold Monto, a professor of epidemiology at the University of Michigan.

“As long as we can protect the health care system, we will be able to function economically,” he said. “The goals should not be no COVID, but controlled COVID.”

Aubree Gordon, an associate professor of epidemiology at the University of Michigan, estimates that 95% of the U.S. population needs to develop a level of immunity to the virus before transmission slows.

After that, she expects “transmission to continue indefinitely with seasonal peaks, but at a lower level and hopefully with much lower severity,” she said in an email.

Vaccination levels in the U.S. remain far from Gordon’s target. Less than two-thirds of the population has received one dose of the vaccine, and less than half is fully vaccinated, according to the Centers for Disease Control and Prevention.

Ali Mokdad, the chief strategy officer for population health at the University of Washington, estimates that roughly half the population remains susceptible to the virus, a proportion large enough to sustain a surge in new COVID-19 cases.

Mokdad predicts the current uptick driven by the highly contagious delta variant, which is leading to a higher surge of cases than was seen over the summer, will continue through September and possibly surge again in winter.

The Institute for Health Metrics and Evaluation projects an additional 76,000 COVID-19 deaths by November 2021.

Amid this wave of new cases, the CDC reversed its guidelines on face masks, recommending that fully vaccinated people wear masks again indoors in places with high coronavirus transmission rates. This reversal followed an alarming analysis of an outbreak in Provincetown, Mass., that found three-quarters of people infected with the virus were fully vaccinated. Of those sampled, 89% were infected with the delta variant.

“Information on the delta variant from several states and other countries indicate that in rare occasions, some vaccinated people infected with the delta variant after vaccination may be contagious and spread the virus to others,” said CDC Director Rochelle Walensky during a news briefing on July 27.

According to an internal CDC document obtained by the Washington Post, the delta variant is more contagious than Ebola, the common cold, seasonal flu and smallpox, and it is as transmissible as chickenpox. The document also warned that vaccines were likely less effective at preventing transmission.

Even so, experts maintain that the vaccines are more than 90% effective at preventing severe illness, even against the delta variant –– and the Provincetown outbreak bears this out. Of the 346 fully vaccinated people infected with the virus, only four were hospitalized, according to the CDC. As of July 27, none has died. Nationwide, 97% of those hospitalized for COVID-19 are unvaccinated.

“Getting vaccinated continues to prevent severe illness, hospitalization and death, even with delta,” Walensky said. “We continue to estimate that the risk of a breakthrough infection with symptoms upon exposure to the delta variant is reduced by seven fold. The reduction is 20 fold for hospitalizations and deaths.”

With the rate of infections increasing, experts worry that the virus will mutate into new, and potentially more dangerous, variants, further complicating efforts by public health officials to inoculate a majority of the population.

“We are concerned, now that infections are increasing worldwide, that there is a room for this virus to mutate again and again,” said Mokdad, the University of Washington public health expert.

Unlike earlier in the pandemic, however, the solution to rising infections is available to most people in the U.S.

“If we vaccinate and we do the right thing, then we don’t have to shut down our economy,” Mokdad said. “It’s in our hands.”