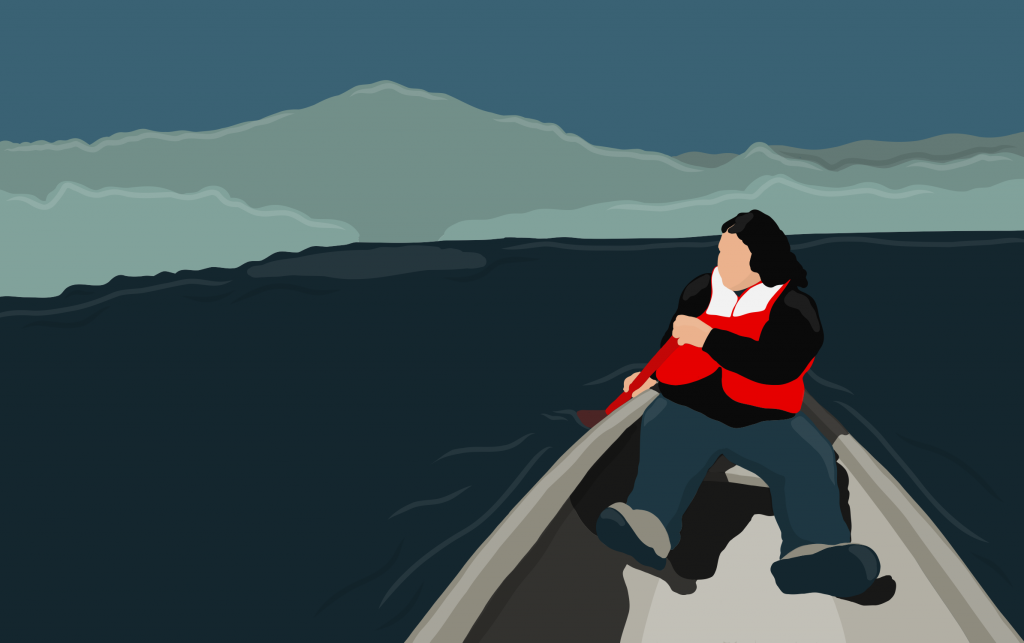 A drought, a pandemic and a landslide — three crises that exposed the food insecurity of  California’s Yurok Tribe have ignited members to explore their own solutions.

Nestled between the Pacific Ocean and the peaks of redwood trees on the mountains, the Yurok Tribe Reservation was declared a food desert by the USDA in 2017. The ongoing food insecurity issue worsened when the coronavirus pandemic, coupled with environmental and infrastructure problems, slammed the reservation and surrounding community.

Sammy Gensaw, 26, grew up paddling redwood canoes on the Klamath River and driving through the winding roads of the mountains in northern California. Gensaw, a member of the Yurok Tribe, has been advocating for his people, and the food that the water and land they live on provide, since he was 10 years old — at meetings and with non-profit groups.

Gensaw said giving people the means to feed their families is a basic need. He said that food sovereignty starts with having access to healthy choices.

“While people are dying here in the Klamath Basin — where people are getting sick and getting diabetes and not being able to provide for themselves — this is what we’re facing,” Gensaw said. “It’s not just the environment. We’re facing a whole system that needs to be changed.”

Native Americans face disparate health effects, making them particularly vulnerable to COVID-19, which further exacerbates food, housing and economic disparities. In response, the federal government, through the CARES Act, allocated $8 billion to be directed to Native American tribes and organizations.

That CARES Act funds and financial support from non-profits have helped Indigenous communities subsidize their efforts to reach food sovereignty. For the Yurok Tribe, that has meant a pivot from the tribe’s traditions like fishing, which is becoming unsustainable, toward gardens. Some members are working to grow their way out of a food desert.

California tribes were allotted more than $19 million in CARES Act funds from the Centers for Disease Control and Prevention to address health needs and related issues, the second largest amount behind Alaska. The Yurok Tribe, the largest tribe in the state with over 5,000 enrolled members, received the largest sum from the CDC of any tribe in California — approximately $1 million. The money, in part, is being put toward food security.

The tribe bought 40 acres of land, which was originally the ancestral land of the Yurok people, with the CARES Act money to be used for food production. The land was purchased for $490,000, according to property tax records.

The Yurok Food Sovereignty Division plans to create “food villages” on the land, according to manager Taylor Thompson. Acres of daisy-covered hills, grassy meadows and redwood trees would become a communal garden, commercial kitchen and tiny homes for workers to create a self-sustaining food system that can withstand a crisis.

Gensaw co-founded the organization Ancestral Guard, which became a non-profit in 2017, and teaches Indigenous youth farming and fishing, as well as provides families a sustainable way to obtain food.

He said it is particularly important to root food sovereignty within the younger generation, who will one day become ancestors who pass on their knowledge.

The reservation is located on a stretch of the Klamath River between the town of Klamath and Weitchpec.

At the edge of the reservation in Klamath along Highway 101 sits the tribal-owned Pem-Mey Fuel Mart, one of two gas stations and the only source of commercially available food on the reservation. It’s this gas station — that provides WiFi for an area with spotty service — where Gensaw submitted the application for a grant that funded the Ancestral Guard four years ago.

If Yurok members living on the reservation want to go to the nearest grocery store in Crescent City, it’s a 46-mile drive up Highway 101 — the main roadway in and out of the reservation — that takes more than an hour without traffic. A landslide in February along a 3-mile stretch of Highway 101, known as Last Chance Grade, between Crescent City and Klamath, stretched the drive for food to up to two hours. The area is now closed Monday through Thursday from 8 a.m. to noon and 3 p.m. to 7 p.m. as well as 8 a.m. to noon on Fridays.

Last Chance Grade is so prone to landslides that locals refer to the patchwork repairs on the highway as “$1 million Band-Aid.” Since 1997, the California Department of Transportation has spent $85 million on maintaining the road, according to the Last Chance Grade Project.

The Last Chance Grade Project began surveying the community in 2015 and projects that the construction of an alternative route could be done from 2031 to 2039. But it would come at a steep cost. A 2018 study found that a one-year closure of Last Chance Grade would reduce business output by $456 million, accrue $236 million in travel costs and require residents to make a 320 mile, six-hour detour.

The pandemic exposed the ongoing food security issue within the tribe and surrounding Indigenous communities, according to Gensaw. Although in the works prior to 2020, the Ancestral Guard began its five-year food sovereignty effort during the pandemic, starting with the Victorious Gardens Initiative. It launched a 10-row community garden near a bend in the Klamath River and has since expanded into 3ft x 6ft garden boxes at 30 homes across the reservation, and the nearby towns Klamath and Crescent City.

The Yurok people are traditionally fishermen. The calm Klamath River, usually abundant with salmon, runs through the reservation down from Oregon. Del Norte and Humboldt County are experiencing historic levels of drought and dryness — with areas of the counties being in severe and extreme drought. In 127 years, 2021 — topping 2020 — was the driest year to date, according to the National Integrated Drought Information System.

It’s this drought and food desert narrative that led Gensaw to start the Victorious Garden Initiative and show, as he says, that fishermen can be farmers. He said that while the Yurok are traditionally fishermen, teaching youth how to garden will not only provide a stable source of food, but create a culture of gardeners and farmers.

The historic drought has allowed for the disease Ceratonova shasta to rapidly spread amongst the salmon, killing off the juvenile fish. While this disease is usually present, low levels of water and the dam on the river, which is set to come down in 2023, have allowed the disease to rapidly spread.

Members of the Yurok Tribe have been financially affected by the drought and pandemic. Jonathan Jackson, a Yurok member, grew up in the late ‘80s and early ‘90s. He fished in the Klamath River by night with his parents and brother and then, during the day, processed the fish in their home. In 2001, he started commercial fishing.

Then the pandemic began, he found that his usual customers for Pacific Native Fisheries — restaurants and fish markets — weren’t buying. Still, Jackson couldn’t afford to stop fishing, so he began making home deliveries.

“When the pandemic hit and everything shut down, we lost all of our markets and then all the big buyers also quit,” Jackson said.

Jackson doesn’t live on the reservation or in the area. He fishes down in the North Bay, he said due in part to the drought along the Klamath. Although it’s many miles south, the North Bay area still feels the effects of the Klamath’s environmental issues. Due to the low salmon population in the North Coast, fishermen are limited on the amount of salmon they can fish further down south because the salmon population travels that way, according to Jackson.

For Jackson, even crabbing season yielded a low pull. This past crab season was the worst he had seen. His first crab pull yielded 400 pounds of crab, and at $3 a pound he only made $1,200. In a normal season the first pull would be 7,000 pounds of crab.

What got Jackson through the pandemic and drought was the Fresh Catch: North Coast Fresh from the Sea program run by the Del Norte County and Adjacent Tribal Lands Community Food Council. The food council was provided with a COVID-19 relief grant from Catch Together, a nonprofit that helps fishing businesses across the country.

The food council bought salmon from Jackson and other businesses that would be used in the food council’s food distribution boxes at Pacific Pantry. The program was able to deliver fish meals to five senior centers and packaged fish to five meal distribution centers, including to  — Indigenous organizations.

“With this crab season being as poor as it has been, it really saved me,” said Jackson. “To tell you the truth, having that extra fishery to be able to do, really, really did save me, otherwise I wouldn’t have made my mortgage payment this year.”

A highlight of the program was being able to support local fishermen and provide Del Norte County residents and tribal members with fresh food, according to Drea Lanctot community food program coordinator at the food council

“As the pandemic sort of showed us our supply chains, we’re trying to keep fish local, so that helps support small fishermen [and] it gave our tribal elders and community members access to the nutrient dense seafood, local protein,” Lanctot said.

Although the Yurok traditionally fish — for catch like salmon, eels, sturgeon and crab — or gather foods — like acorns and berries — in the midst of a food desert, they’ve turned to growing foods for a healthier future.

“We’re really just learning what it is to be farmers, really, because we’re all fishermen,” Gensaw said.